Historic Tenure Ends After Almost Half Century with the Government 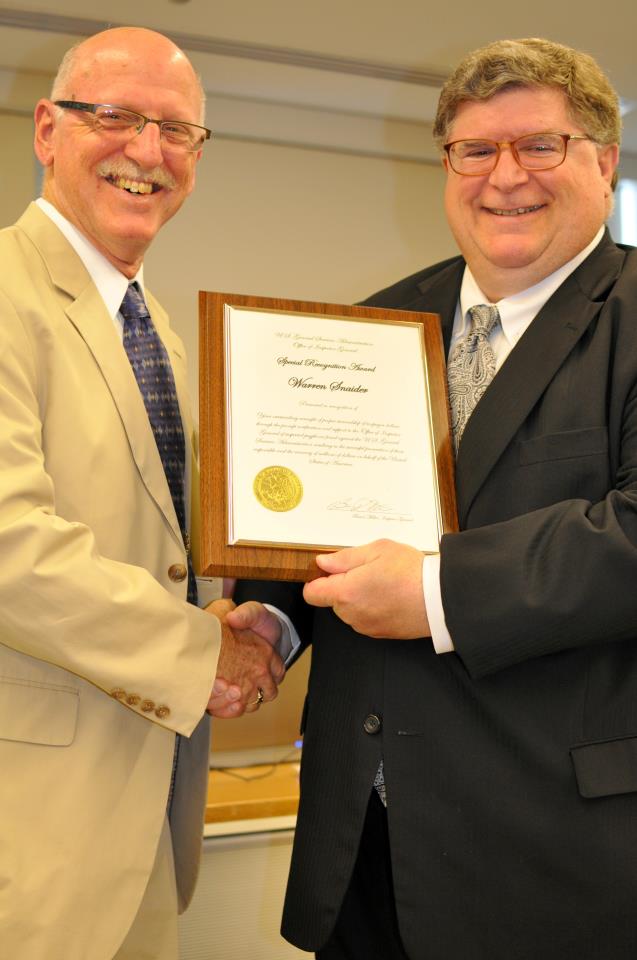 In 1975, Warren Snaider was a few years into his job at GSA’s two-person Federal Information Center in Sacramento, Calif., when he was confronted by a man wearing a suit and tie and obviously carrying a gun. The federal office was located inside the U.S. courthouse and the metal detectors had not yet arrived in the aftermath of the attempted assassination of President Ford.

Snaider, nervous on the inside, calmly looked at the man and asked him about the handcuff emblem on his tie-pin. A security guard heard the exchange and asked for verification that the visitor was indeed a law enforcement officer. He was. Fortunately for the GSA, Snaider did not let that incident and many others stop him from serving the government for 40 plus years.

Today, Snaider carries the informal title of Information Specialist with GSA’s USAGov in Washington, D.C. He no longer deals directly with the public but focuses on quality assurance for the contact center.

Over the years, Snaider has witnessed many evolutionary changes at USAGov but two stand out. The technology innovations were the first. Today’s computers are networked - a far cry from the original automation of the Federal Information Centers that required manually carrying disks from computer to computer.

The other transformation was the various channels people can use to reach out to the government. It went from walk-ins and phone calls with small centers in over 40 federal buildings nationwide to a single contact center with the ability to handle public inquiries about the government via  e-mail, phone, postal mail and chat.

“If you have a question at 10:30 at night, you …..write an email, send it off to us and we will get back to you in a few hours on the next business day. It is a great opportunity to serve people,” Snaider said.

Another way Snaider’s tenure mirrors USAGov's growth was when he was hired in 1972 -  he had a basic understanding of Spanish. Even then, the government understood the importance of being bilingual. Today, the contact center responds in all channels in both English and Spanish.

Snaider also played a vital role in formalizing the establishment of GSA’s network of contact centers in 1978, as one of a handful staffers who gave testimony before a Congressional hearing in San Francisco as part of the legislation process that led to the signing of Public Law 95-491, the Federal Information Centers Act.

After seven years in his native California, Snaider got a chance to move to GSA’s main office in Washington, D.C.  when a colleague declined a position at headquarters. He went from seeing the public daily to being a bureaucrat in two weeks. In the beginning, it was not easy.

“At first, I really missed my family. I lived like a king in Sacramento but even with the promotion, D.C. was expensive. And I missed interacting with the public, but my boss told me, 'You have an administrative role now.' It was great advice, and I adjusted to helping in a new role,” he recalled.

Helping people is part of Snaider’s DNA. He  grew up a military "brat," the son of an Air Force officer with a brother who is a Naval Academy graduate. Snaider himself was drafted into the Army after graduating from Stanford University in Palo Alto, Calif.

As part of his love of serving others, “Did I answer your question?” became his signature phrase on the phone and in writing.

Both personal and professional changes plus surviving two bouts of cancer tell him it is time for a new transition. He will miss coming to work, seeing his colleagues and helping the contact center deal with complicated inquiries.

Although he was born in Berkeley, Calif., and has lived in Nagoya, Japan; Laredo, Texas; Montgomery, Alabama; Minot, North Dakota; the city of Washington, and other places, the city of Mountain View, south of San Francisco,in Silicon Valley, is the place Snaider calls home. He plans to move back to the west coast after selling his condo in D.C. Then he will focus on his hobbies - gardening and running.

As a new chapter begins for Snaider, his love of learning, historic government knowledge and cheerful attitude will be missed by the entire USAGov family.

Sandra Abrams is a member of the USAGov content team.